Let’s start with talking about the screen you’re currently glaring at to read this article. If you don’t scroll down then the screen is pretty much static right? Not really. Behind the screen, all the pixels controlling what you see is getting multiplexed so fast that our eyes make it out as a constant one. Basically, a word is constantly consuming energy just to remain onscreen.

If you write a word on paper, does it need any more energy to remain on the paper? No. It remains there forever. This is the basic idea behind E Ink. Energy should only be used to ‘write’ the word. After that, no more energy should be consumed.

The notion of a low-power paper-like display had existed since the 1970’s, originally conceived by researchers at Xerox PARC, but had never been realized. MIT undergrads J.D. Albert and Barret Comiskey came up with the idea of microencapsulated electrophoretic display to solve this problem. The initial idea was to create small spheres of half black and half white particles and somehow manipulate them to create images. Comiskey while experimenting could create tiny all white particles. Comiskey experimented with charging and encapsulating those all-white in microcapsules mixed in with a dark dye. The result was a system of microcapsules which could be applied to a surface and then could be charged independently to create black and white images.Once the orientation is attained, no energy is required to keep them in that fashion. Thus the image remains in that state forever. 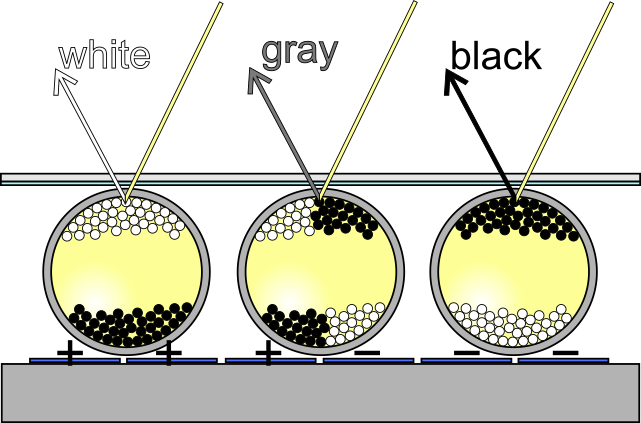 The above picture depicts how the pixels of E Ink display can be controlled using the potential difference. The MIT undergrads went on to create the E Ink Corporation in 1997 which created several new designs of the E Ink technology. Since then the technology has been improved tremendously. The first generation was called vizplex. Next came pearl and mobius. Pearl is used in almost all amazon kindle products except the paperwhite and oasis series. Pearl’s major disadvantage was it’s substrate made of thin glass which made it’s structure fragile. This disadvantage was overcame by mobius which has a substrate of flexible plastic. The third generation E Ink called triton features a colour display which is easy to read in high light. The next updates carta and carta HD improved the resolution of the screen. 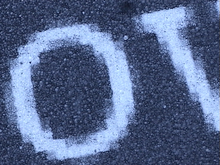 That was all about how the E Ink was made and how it developed. Where is “reads like paper” part? Well, this was achieved using the screen lighting properties. A general screen like the one you are using is backlit. Meaning it produces light of its own below the screen surface. ‘Electronic paper’ mimics the normal paper, it does not produce light, rather reflects it. This means that they are more comfortable to read and have wider viewing angles than most light-emitting displays. The contrast ratio in e-paper available as of 2008 approaches newspaper and newly developed displays are slightly better. An ideal e-paper display can be read in direct sunlight without image appearing to fade. Since it uses light reflected on it to display, thus you won’t be able to see anything in a dark room (just like paper!). But have you seen the new kindle paperwhite? It boasts of it’s readability even in dark with almost zero glare. Paperwhite uses an integrated lighting system. It’s not a backlight. Its a small light shown onto the front screen which hits the screen and bounces back to you.

Nice right? Lots of innovations like these are happening in the world of E Ink. E Ink is slowly replacing LCD screens in lots of applications without us even noticing. The newly announced Advanced Colour E- Paper (ACeP) boasts of a display of 32000 colours. Currently they have a refresh rate of 2 seconds. Yes, the future is exciting. These durable easy to read screens are taking over the world from billboards to price tags to walls of your house. We have been imagining this future forever: the all screen worlds of total recall, minority report, blade runner, and other less dystopian movies. 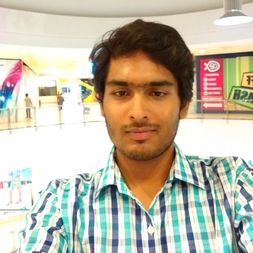