Measure of fat content in milk with LED and LDR

India's milk production is estimated to have increased by 6.6 per cent during the last four year. Price of milk is based on the quantity of FAT present in milk . so we need machine which can measures milk parameters like SNF (Solid but Not FAT), FAT, CLR, with less cost.

The important thing is that machine should be cheaper and only based on electricity .then it is very helpful for the remote area also.

Coming to the point photometric based sensor or light backscatter application technique is able to fulfil the remote area condition(which was proposed by IJIRCCE).

How is it better then other method ?

first have a look on primary method -

The specific gravity of fat is 0.9 and that of acid milk mixtures is 1.43. This situation promotes complete separation of fat when proper centrifugal force is applied.

Due to application of centrifugal force lighter substances (Butter fat) are thrown towards centre and rest of serum portion that is heavier is thrown towards the pheriphen.Addition of amyl alcohol helps for separation of fat from the milk acid mixture and also prevents the charging of fat and sugar by the H2SO4.

Generally this principal is used in industries and it is also costly.

Now let's discuss about light backscatter application and it's working-\>

A sensor with two optical fibers, as shown in Figure 1, was used to monitor the coagulation step. An LED light source directs light into an optical fiber that terminates in the milk and an adjacent fiber separated by a distance r1 receives the light backscatter. The uniqueness of this light backscatter configuration is that the light must traverse through a finite distance of fluid (free of specular reflectance) and be backscattered by particulates to the receiving fiber. This configuration was used to measure the change in light backscatter during milk coagulation. 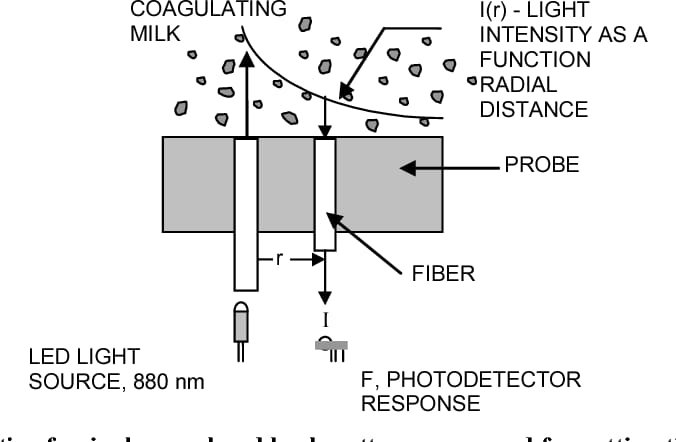 Next figure shows the fiber optic measurement of intensities at two radial distances, r1 and r2, from the emitting fiber. The sensor employed three optical fibers: one that delivered light to the scattering media and two others that measured light intensity (I1 and I2) at spatially separated points r1 and r2, respectively (∼1 mm apart). 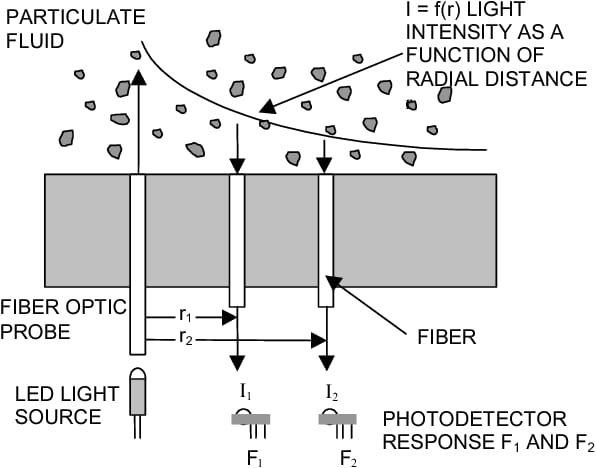 Figure 2. Schematic of the optical fiber configuration tested for measuring composition showing a LED focused on a fiber and two receiving fibers at radial distance r1 and r2 focused onto detectors with outputs F1 and F2.

A relatively simple empirical correlation between the distribution of backscattered light intensity and the particle concentration was utilized by adapting a widely used diffusion approximation equation presented by Bolt and ten Bosch [1]:

where: I0 = apparent intensity at radial center line of emitting fiber

In the development of a sensor, the use of signal ratios has the advantage of normalizing the resulting response. This isolates the signal ratio from changes in light intensity and some changes to the physical system (optics, mechanical connections, etc.). For the fully developed diffusion area, the ratio of the intensities at two radial distances (r1 and r2) using Equation (1) reduces to the following equation:

where r1 and r2 are radial distances for fiber 1 and fiber 2, respectively, and K is a constant for a specific fat content. This equation predicts an increasing signal ratio with increasing milk fat. Light scattering is dominant for high concentrations of fat and the widely used diffusion approximation is valid for this case.

A consistent light backscatter pattern (reflectance ratio – ratio of light backscatter signal to initial signal at time zero) was found and is shown in Figure 3. The reflectance ratio is initially relatively steady, traverses through a sigmoidal increase and then gradually increases at a decreasing rate. The first chemical reaction during the enzymatic coagulation of milk for cheese making is the reaction of chymosin and casein. This enzymatic reaction phase destabilizes the colloidal nature of casein micelle but does not significantly affect light backscatter. This reaction proceeds as a first order chemical reaction when the substrate concentration (casein) is in excess supply in relation to the enzyme concentration. The second phase is the aggregation phase of the destabilized casein micelle into flocks which grow and consume the entire casein particulate system. It is during this phase when larger particles are formed and the reflectance of light increases rapidly. The aggregation reaction follows a second order chemical reaction. The third phase is the gel forming phase which results from a micro consolidation of protein strands that result in stronger protein strands and an increasing space within the protein matrix. This phase follows a first order chemical reaction. These three chemical reactions overlap with the resulting reflectance profile as shown in Figure 3. The reflectance of milk at 880 nm typically increases 15% to 40% during coagulation providing a strong response signal. 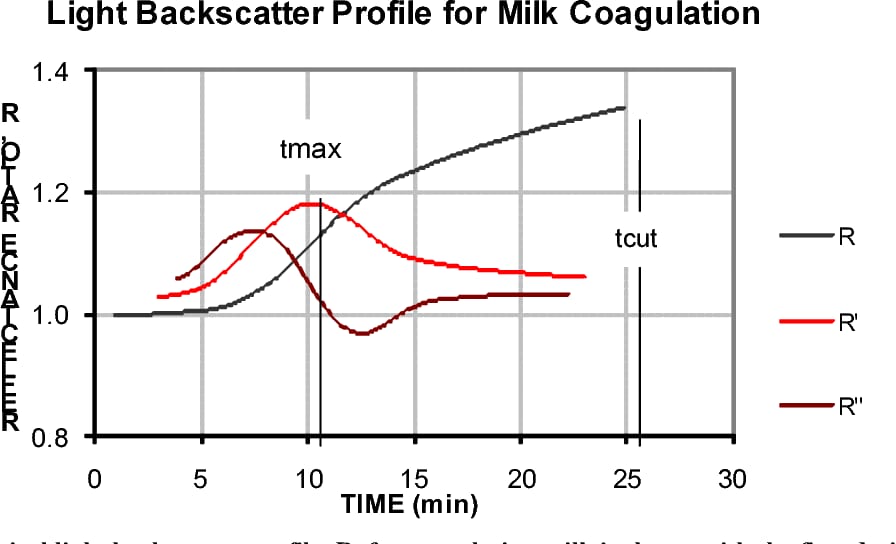 Figure 3. A typical light backscatter profile, R, for coagulating milk is shown with the first derivative, R', the second derivative, R'', and the time-based parameter, tmax

where β = a calibration constant (usually determined by the cheese maker) which typically varies from 1.3 to 2.5. Equation 3 requires only tmax. (a time-based parameter) and protein content to make a cutting time prediction. The time-based parameter, tmax to be an exact measurement proportional to the enzymatic reaction rate. The change in reflectance does represent product changes; however, numerous attempts at extracting consistent information from reflectance changes have proved fruitless. Figure 4 shows observed and predicted cutting time for a broad based test of conditions typically encountered in cheese making. 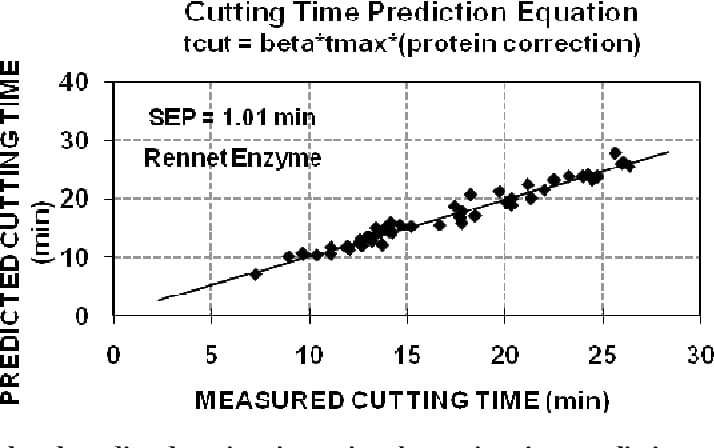 The light backscatter was measured during the culture of cottage cheese. A typical reflectance profile is shown in Figure 5.

A cutting time prediction equation was determined for cottage cheese culture using time-based parameters and a multiple linear regression. The profile is more complicated in that there are two maxima in the first derivative. The second noteworthy difference is that light backscatter increases 200% during the process providing a very strong signal. 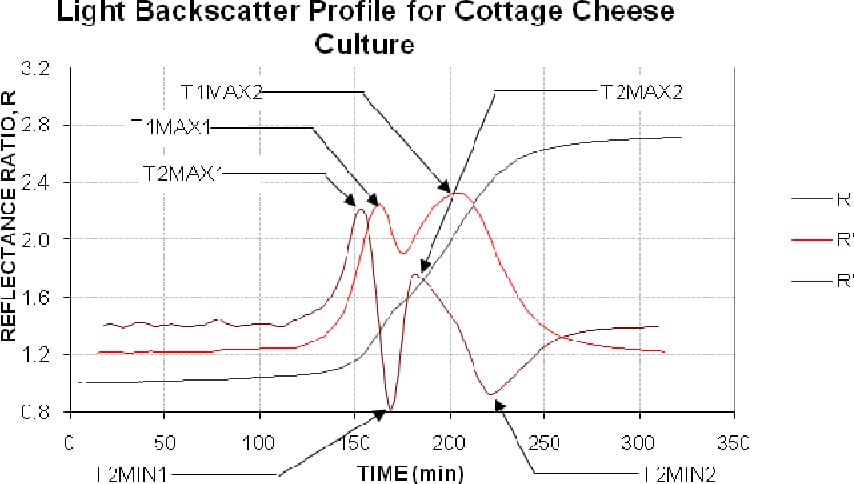 The ratio of light intensity response, (I2/I1), measured with two detectors spaced at different radial distances was referred to as signal ratio and was found as predicted by Equation 2 to increase with fat content. The signal ratio for homogenized whipping cream diluted in water is shown in Fig. 6.

A single waveband backscatter with two detectors spaced at different radial distances that measures optical extinction has several applications in the dairy industry where an inexpensive sensor is required to monitor and control product composition. A light extinction sensor is a response-based sensor normalized by dividing two signals. Further testing to optimize light wavelengths and fiber spacing is required before a light extinction sensor can be developed with the accuracy and precision required by the dairy industry. From experience, it is known that the attenuation of light varies significantly between products. Thus the determination of optimum fiber spacing and wavelength is required for different products.

Figure 6. Light backscatter signal ratio as a function of homogenized whipping cream (36% milk fat) at 25 C for light at 470 nm. 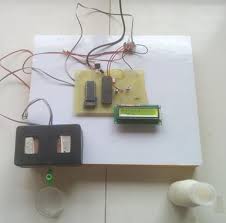 Circuit shown in image is simple and cheaper so this process is in favour of farmer and as well as dairy industry and as the results from all three methods are nearly same. So it is best in compare to other . 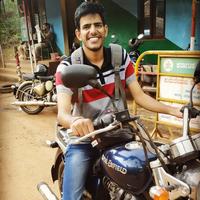