Have you ever wondered how self driving cars detect obstacles on their way or how image captioning works? All this is possible due to object detection. This blog explains how deep learning techniques are used in object detection.

Object detection, in simple terms, is a method that is used to recognize and detect different objects present in an image or video and label them to classify these objects. It provides a much better understanding of the object as a whole, rather than just basic object classification. The important difference is the “variable” part. In contrast with problems like classification, the output of object detection is variable in length, since the number of objects detected may change from image to image. All in all, it answers the question: “What object is where and how much of it is there?”.

Object detection is commonly confused with image recognition, so before we proceed, it’s important that we clarify the distinctions between them.

Object detection : It draws a box around each dog and labels the box “dog”. The model predicts where each object is and what label should be applied. In that way, object detection provides more information about an image than recognition. 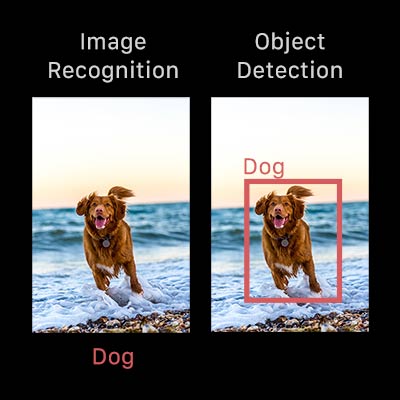 The simplest approach is to pass the image to the series of convulation and pooling layer and we get object class as an output. But how we will do that for multiple objects? For multiple objects, we can divide the images into various regions and take different regions as different image. Pass all these regions (images) to the CNN and classify them into various classes. Once we have divided each region into its corresponding class, we can combine all these regions to get the original image with the detected objects. The problem with using this approach is that the objects in the image can have different aspect ratios and spatial locations. To overcome all these problems, there are multiple DL Algorithm. Some of them are discussed below:

To deal with the problem of R-CNN, Fast R-CNN was proposed, It takes the whole image and region proposals as input in its CNN architecture in one forward propagation. It also combines different parts of architecture (such as ConvNet, pooling, and classification layer) in one complete architecture. That also removes the requirement to store a feature map and saves disk space. It also uses the softmax layer instead of SVM in its classification of region proposal which proved to be faster and generate better accuracy than SVM.

After the Fast R-CNN, the bottleneck of the architecture is selective search. In Faster R-CNN, it was replaced by the region proposal network. RPN takes image feature maps as an input and generates a set of object proposals, each with an objectness score as output. RPN uses a sliding window over these feature maps, and at each window, it generates k Anchor boxes of different shapes and sizes. Anchor boxes are fixed sized boundary boxes that are placed throughout the image and have different shapes and sizes. For each anchor, RPN predicts two things:

YOLO is a one-step process for object detection. It is a neural network model that requires just one pass of an image through its network to conduct object detection. An obvious benefit is that YOLO proposes greater efficiency when compared to RCNNs. YOLO algorithm works using the following three techniques:

There are various dataset used for training the model