Rise of Robotics in medicine

Robots are revolutioninzing the practice of medicine. Today,medical robots are well known for their roles in surgery.

RISE OF ROBOTICS IN MEDICINE

The Healthcare industry is always on the quest for new methods to develop and innovate. Robots have come a long way from being science fiction to assisting in surgical procedures. They help in improving efficiency and precision in the healthcare industry.

There are different generations of surgical robots-

The first-generation robots and their first surgeries

In 1985, PUMA (Programmable Universal Machine for Assembly) - a robotic arm, assisted with a neurological biopsy for the first time. Computed tomography (CT) guided the robot while inserting a needle into the brain. Earlier, this procedure was subjected to errors due to shivers or tremors in human hands during the needle placement. But, PUMA conducted the operation successfully. Originally, PUMA was a standard industrial robotic arm. Thus the first-generation robots were not designed primarily for medical purposes but modified to perform medical tasks.

Few of the first-generation robots were declared “autonomous” by the U.S. Food and Drug Administration (FDA), which meant they could carry out some procedures entirely by themselves without a surgeon’s guidance. In 1992, ROBODOC was the first FDA-approved robot. ROBODOC was used to move the femur during hip replacement surgeries. 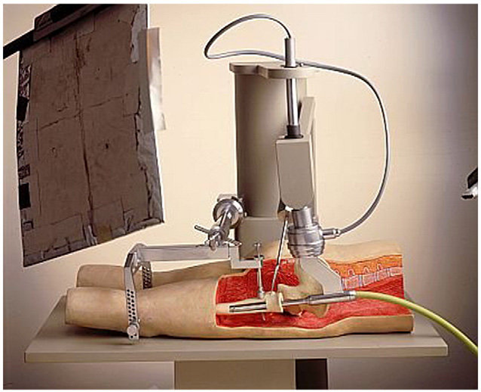 With many such robots coming into the medical field, surgeons wanted robots to be collaborative assistants and not replacements. This thought gave rise to the second generation of surgical robots.

Second-generation robots work in a master-slave configuration. The robot (slave) translates the surgeon’s (master) hand, wrist, and finger movements in this configuration. The most popular one of this generation is “The da Vinci Surgical Robot.” The FDA first approved it in 2000. 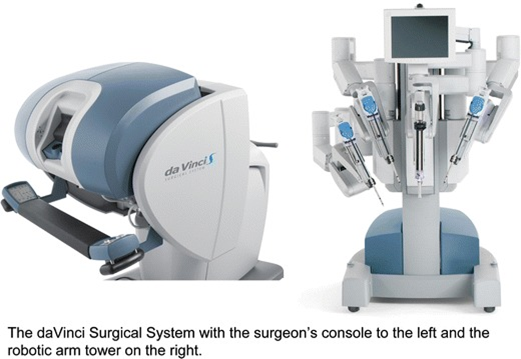 The four interactive arms of the robot hold tools like scalpels, scissors, and graspers. The doctor seated near the master console controls the arms. The instruments move on a small scale inside the patient’s body based on the hand movements of the surgeon. The camera and light source in one of the arms guide the surgeon during surgery.

When the surgeon moves his head away from the console, the activities of the da Vinci Surgical System suddenly stop. Therefore any severe problem in surgery is prevented.

Robots can be smaller or larger than humans - Consider the picture below. A surgeon’s hand has the farthest reach of 10cm, while that of a small robotic device is about 1cm. 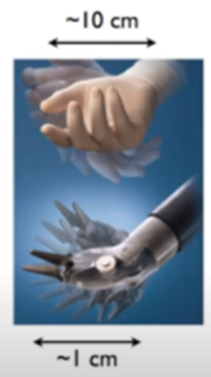 Since robots can be smaller than humans, they can operate on patients through smaller incisions. Smaller incisions cause minor damage to body tissues. With less tissue damage, it is more likely for patients’ recovery time to increase.

Furthermore, it is easy to support and lift patients with the assistance of giant robots compared to the effort that a health worker puts in.

Eliminate human error and provide higher accuracy - Robots can perform precise movements and be present with patients for as long as necessary. Unlike human beings, robots are tireless, and their “hands” never quiver. They can be used for simple repetitive tasks during the surgery, while humans can take up the crucial functions.

Medical images serve as a rich source of patients’ data. Surgeons get different geometrical information about what is happening inside a patient’s body. Though surgeons and other medical experts utilize this information amazingly, robots can use the information in a better way. Robots can analyze virtual boundaries around delicate organs and restrain themselves from venturing into them from the images.

Gaining the trust of many patients who are doubtful about undergoing a robot-assisted surgery is essential. Attempts are on the go to use robots for emotional support. With sophisticated technologies coming up in the future, biomedical engineering will continue to find better ways to handle various medical procedures.

Diode Rise of Robotics in medicine