For example, given an array A of N elements, answer Q queries (of two types):

A similar version of the above problem for minimum(i.e. to find the minimum between L and R) is famously known as Range Minimum Query. These problems can be easily solved with segment trees.

A naive approach would be to answer queries of type 1 by running in a loop from L to R and finding the required sum and type 2 by performing updates on the array.

But what if there there are a large number of range queries, the above algorithm can take O(Q*N) time. For such problems, Q and N have an upperbound of 105 usually in contests (Hence won’t pass).

Can we improve this algorithm? Yes, we can by using Segment Trees.

So, what is a Segment Tree?

We compute and store the sum of the array A[0 – N-1]. Then we divide the array into two halves and compute the sum of each half, i.e, sum of A[0 – N/2] and A[N/2+1 – N-1]. We continue this process again for each half untill an array with single element is reached.

Note on convention: From now on, A[L - R] will represent the sub-array of A between L and R (both inclusive).

Each node corresponds to sum of given segment. Its called “Segment Tree” because it can be easily visualised as a tree.

Note that the height of the tree is O(logn) since moving from any parent node to chlid node, the size decreases by approximately by half.

A Segment Tree can be efficiently implemented as follows:

The time complexity of construction in O(n) because each edge is returns just one value.

Note:
Here, segment trees are stored in an array T(1 - indexed). We call a node i if it’s corresponding sum is stored at T[i]. We reresent the tree in T by

Following is the implementation for construction of Segment Tree:

But how does constructing a segment tree help in finding range queries?

After the constructing the Segment Tree, it is possible to answer sum queries of the form A[L – R] in O(logn) time.

We compute sum queries by using the pre-computed values of segment sums. The idea is any given segment of values L and R, sum A[L – R] can be represented as sum of pre-computed sub segments.

This can be done by traversing the segment tree.

Following the algorithm we use for range query:

We get the required output by calling Range_Query(root, L, R).

The procedure is illustrated in the following image. The array a=[1,3,−2,8,−7] is used, and here we want to compute the sum of A[2 - 4]. The colored vertices will be visited, and we will use the precomputed values of the green vertices. This gives us the result −2+1=−1. 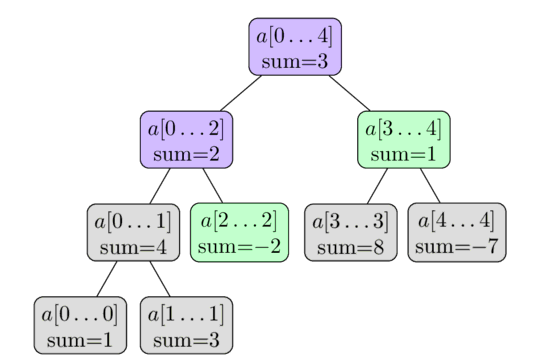 Following is the implementation for range queries:

In conclusion the query works by dividing the input segment into several sub-segments for which all the sums are already precomputed and stored in the tree. And if we stop partitioning whenever the query segment coincides with the vertex segment, then we only need O(logn) such segments, which gives the effectiveness of the Segment Tree.

This query is easier than the sum query. Each level of a Segment Tree forms a partition of the array. Therefore an element A[i] only contributes to one segment from each level. Thus only O(logn) vertices need to be updated.

It is easy to see, that the update request can be implemented using a recursive function. The function gets passed the current tree vertex, and it recursively calls itself with one of the two child vertices (the one that contains A[i] in its segment), and after that recomputes its sum value, similar how it is done in the build method (that is as the sum of its two children).

Here is a visualization using thearray a=[1,3,−2,8,−7]. Here we perform the update a[2]=3. The green vertices are the vertices that we visit and update. 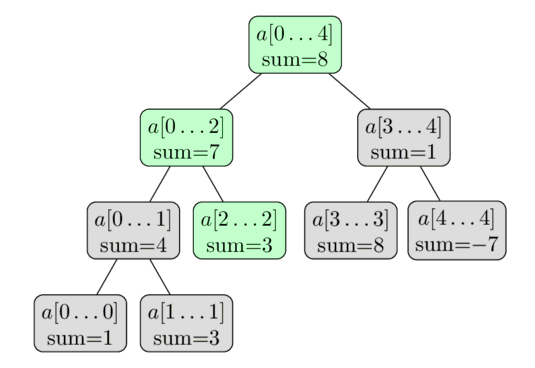 Following is the implementation for point updates:

You can use the following functions as helper fuctions(for ease of use):

This is similar to range query except that it asks for number of minimum elements in the given range.

Here, at each node of the segment tree, minimum and count of minimum element is stored. Try implementing the solution to this problem.

The solution is similar to sum queries problem but with different conditions for merging solutions. By merging, I mean the step of updating the parent node value(or gathering query result) from its child nodes value(which occurs in construction and range queries).

Hint: Use struct for each node to store minimum and count

This is a slightly harder problem. The point to note for such problems is that everything boils down to the merging step. If we are able to define contents of each node in the segment tree and are able to get a way to merge two child nodes to return required answer(or update parent), then we are done.

Here, note that the number that divides all elements in a segment should be the minimum. If such a number exists, then it should be the GCD of all numbers in the segment.

So the count of the number of minimums in range L-R, given that minimum is equal to the gcd of that range will be our answer to every query. The problem boils down to finding the GCD, MINIMUM and count of MINIMUM for every range using Segment trees. On every node of the tree, three values are stored. On querying for a given range, if the gcd and minimum of the given range are equal, countMINIMUM is returned as the answer. If they are unequal, 0 is returned as the answer.

Bonus: Check out two dimensional segment trees if you are interested: https://www.geeksforgeeks.org/two-dimensional-segment-tree-sub-matrix-sum/

This article is supposed to be an introduction to Segment Trees. If you feel comfortable with the contents of the article, then do check out lazy propagation on segment trees. (this allows you to perform range queries and range updates on the segment tree) 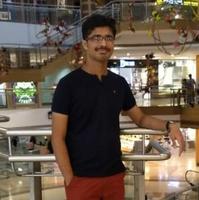