The term ‘Laser’ originated as an acronym for Light Amplification by Stimulated Emission of Radiation. The difference between a Laser and other Light sources is the coherence. The spatial coherence of lasers allows them to be focused on a tight spot, enabling applications such as lithography, laser printing, refractive surgery, and of course, Laser Cutting.

Laser cutting is one of the most popular applications of Lasers. Compared to conventional mechanical cutting techniques, laser cutting is more accurate, eco-friendly, and efficient.

In Water-Jet Guided Laser Cutting, the laser beam used is guided to the workpiece through a high-pressure water jet. The water jet functions like an optical surface, resulting in total internal refraction of the laser due to the difference in refractivity index of water and air. Similar to an optical fiber, the beam is reflected many times on the surface of the jet before reaching the workpiece. 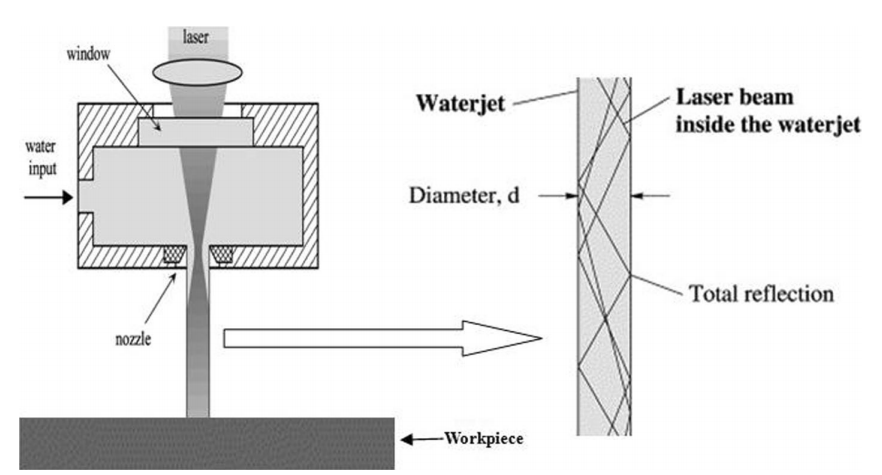 The nozzle diameter for a typical water jet ranges between 20µm and 150µm. The pressure of the filtered, deionized, degassed water can reach 600bar on smaller nozzles. The nozzles are made from diamond or sapphire. Degassed and deionized water is used to minimize energy absorption within the water jet. The laser beam gets reflected at the interface of water and air as it comes into contact with the pressurized water exiting the nozzle. The laser on reaching the workpiece causes it to melt and vaporize. The water jet also assumes a secondary role here, cooling the workpiece to reduce the generation of harmful fumes.

Initially, the waterjet guided laser was developed to reduce the Heat Affected Zone (HAZ). The use of a water jet instead of a conventional assist gas stream led to several additional benefits. The divergence of the beam is reduced, which proves advantageous when cutting metals thicker than 1mm. There is an immediate cooling of the cut, and the high momentum of the water jet efficiently removes the molten materials, resulting in a clean, burr-free cut.

This technology has many advantages over conventional laser cutting and water jet cutting. Focal optics are not required in this technology. The water jet's mechanical force is significantly less compared to that of conventional jet cutting (0.1N as opposed to 1-5N), and thus the scathing of the workpiece surface is negligible.