For large codebases, code explainability is a major challenge. When dealing with unfamiliar codebases, it is common to spend more time learning the code than actually working with it. If a novice Python programmer attempts to read it, they may find it challenging to comprehend its behaviour. The behaviour of the source code may be better understood if the pseudo-code and flowcharts of the code were used at the same time.

What is Machine Translation?

Since the 1950s, training computers to translate two natural languages have been tedious. With the advent of machine learning and artificial intelligence in the early 2000s, this task became feasible with acceptable accuracy. Machine translation is a sub-field of computational linguistics that studies the use of software to translate text or speech from one language to another. In the modern-day, machine translation is used for various translation tasks, including Google Translate, translation of the text on social media platforms, translating event proceedings in the European Commission, etc.

Machine translation evolved significantly from its inception in 1951, from simple rule-based heuristics to statistical methods and finally using advanced Machine Learning techniques like Deep Neural Networks. The goal of machine translation has always been to effectively translate a sentence from a source language to a sentence in a target language while maintaining linguistic, semantic and syntactic similarities through the translation.

Machine Translation can broadly be classified into 3 types:

The latter 2 methods are explained below.

SMT is a machine translation method where the translations are made based on previously seen bilingual corpora. The model makes a prediction on what the next word will be based on previously seen sequences of words. The statistical approach contrasts with the rule-based approaches to machine translation as well as with example-based machine translation. The idea for statistical machine translation comes from information theory where a probabilistic distribution p(T|S) that a string T in a target language is a translation of string S in the source language is modeled by applying various statistical and probabilistic techniques on a huge amount of textual corpora. Bayes theorem is one such modelling approach. Even though an SMT model would perform better than a Rule based model, it has its own downsides and is nowhere near to match accuracies with Natural Human Translation. An SMT model also performs poorly on a language pair with differing word orders and linguistic structure.

More recently, deep neural network models have achieved state-of-the-art results in a field that is aptly named Neural Machine Translation. Most Neural Machine Translation systems follow the encoder-decoder architecture where the source sentence is encoded into a constant size vector using a Recurrent Neural Network as shown below and fed into another decoder network along with words from the input sentence. The constant size vector provides the required contextual information to

The above architecture, however, fails when the length of the sentence increases beyond a certain limit. This happens because we are trying to cram variable amount of contextual information into a fixed sized vector. In order to overcome this, we use Attention Mechanism.

Attention allows the decoder network to “focus” on a different part of the encoder’s outputs for every step of the decoder’s own outputs. First we calculate a set of attention weights. These will be multiplied by the encoder output vectors to create a weighted combination. The result should contain information about that specific part of the input sequence, and thus help the decoder choose the right output words. Calculating the attention weights is done with another feed-forward layer, using the decoder’s input and hidden state as inputs. 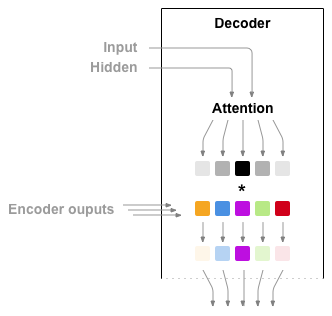 Due to its robust and flexible nature, with the extensive use of special characters with significant meaning, translating Python code to Pseudocode is much more complex than a simple language-to-language translation.

Here, to take care of the syntax and use of characters such as [, {, /, // etc., we have used a rule-based architecture to generate an Abstract Syntax Trees to provide linguistic context to the encoder. This, not only helps to simplify the model which would otherwise have to be very detailed to catch the different comprehensions and shorter notations, but also allows us to use a Neural Machine Translation model to translate the code to pseudocode.