Reinforcement Learning (RL) is a branch of Machine Learning based on learning from rewards and punishments. The objective of the agent is to learn a function that exhibits desired behavior in an environment.

Here’s a demo video of the project:

Reinforcement Learning (RL) is a branch of Machine Learning based on learning from rewards and punishments. It involves a feedback loop between the agent(s) and the environment, bounded by a mathematical framework. The objective of the agent(s) is to learn a function(s) that exhibits desired behavior in an environment.

This is a very simple organization of the RL framework and can become very complicated when it comes to applications in real-world settings. There can be multiple issues like using function approximators, multiple agents, adversaries, a poor model of the world, stability and scalability issues, etc.

We aim to explore one such direction in this project.

The scalable applications of Reinforcement Learning are accomplished by blending RL methods with the representational capacity of Deep Learning models like Neural Nets. The state and action space of the environment can be exponentially large in the real-world settings, and hence the traditional Tabular RL framework cannot be used, even with an asymptotically infinite amount of computation power available.

Hence we make the use of function approximators (specifically Neural Nets) to learn the functions like the policies and the value-functions. These functions essentially correspond to the “behavior” of the agent(s) in the environment.

As we all know, Neural Nets are extremely good at approximating functions and learning complex behaviors from its applications in other Deep Learning domains like Computer Vision and NLP. They prove to be effective even in RL settings, though the learning process needs certain bells & whistles to work efficiently and effectively.

There have been a large number of wide and successful applications of Deep RL in the recent years ranging from reaching super human-level performance in playing games like Go, Chess, Atari, Dota2, etc., Online advertising, applications in Medicine for Protein Folding, robotics, and many more. The list goes on!

But are the systems robust enough? Can they be failed? What vulnerabilities do they have? Do they really achieve super human-level performance?

This is a work from Goodfellow et al., 2015 and shows the existence of Adversarial examples in Computer Vision. Given is an image of Panda, which is classified correctly with a probability of around $57.7\%$. The middle of the figure seems the addition of seemingly random noise times a small constant factor to the original image, and the resulting image seems to be almost the same as the original. Still, it is classified as a Gibbon with $99.3\%$ confidence by the same Neural Network!!

This result looks bizarre, but actually is nothing but a construction of adversarial examples for the corresponding clean example. The image in the middle that looks like noise is not actually some random permutation of the pixels; instead it is a carefully computed perturbation that is specifically designed for the model to make a mistake.

You might be wondering if such adversarial attacks exist in Reinforcement Learning too, and the answer is Yes they do! The objective of this project was to explore Adversarial attacks in Single as well as Multi-Agent domains, and study their effectiveness against existing state-of-the-art (SOTA) works. We also studied Defense mechanisms to resist such attacks.

We focussed on the following two domains:

Pixel-Based attacks Attacking Deep RL systems that take image pixels as the state (or observation) input. We use Atari 2600 games (in particular Pong) as a benchmark to test the attack in White-box as well as Black-box settings. This is inspired directly from the way adversarial examples are generated in Supervised settings. 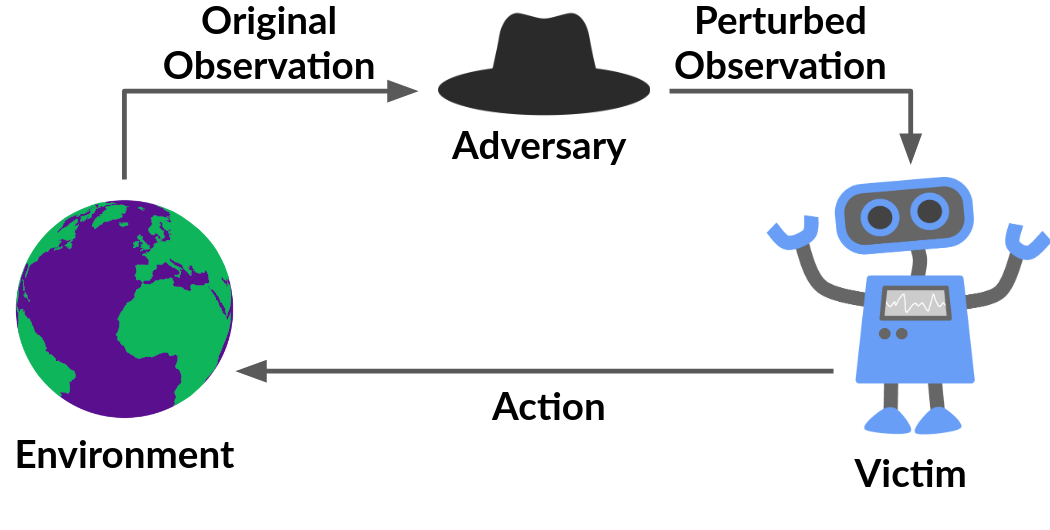 This class of adversarial attacks involves the systems where the adversary can be a part of the agent-environment loop. It need not have complete information about the agent/victim. The attacks also exist in Black-box conditions, due to the Transferability of adversarial examples. We deal with both settings.

Most of these attacks are studied in Computer Vision but can be applied in a similar fashion in RL, where the input state-space to the Neural Net is the pixels. There are multiple approaches to achieve this with a common goal for all. The goal is to -

This an illustration of the FGSM attack method on the Atari game Pong. First, we train a policy to play Pong with the Proximal Policy Optimization (PPO) algorithm for about 20 Million time steps. The Pong agent becomes extremely good at playing the game and is able to beat the opponent most of the time. Then we apply the attack method (refer to this post for more details). The results we obtained clearly show the effectiveness of the adversarial attack carried out.

The constraint that the adversary can be a part of the agent-environment loop can be unrealistic in certain cases, especially in real-world applications.

Hence we have a more realistic multi-agent threat model, where the adversary influences the other agent or the victim by taking certain adversarial actions, which in turn affect the victim’s observations. So this is different from the pixel attacks where the adversary could perturb the input directly. This is commonly seen in various applications like self-driving cars. In such cases, the adversary cannot directly manipulate the pixels from the camera on the car, or it cannot do things like make a building disappear. Hence this form of attack is applicable in real-world settings.

And this is not an unrealistic assumption. In common applications of reinforcement learning or machine learning in general, we train a system and then freeze or seal it for deployment. Hence the attack can happen in such a situation.

We also studied various Defense methods that have been proposed to resist such attacks. Sadly, there is no single defense system developed yet that can be used effectively against the respective attack methods. There have been a few methods introduced, but either they work only for certain adversarial policies and not against the others, or they do not work against stronger attacks.

To know more about the defensive systems, refer this and this. These were studied as a part of this project.

Also, sometimes it is not the algorithm or the function approximator architecture that might be responsible for adversarial attacks. As we saw in the Adversarial Policies section, the victim and the opponent where clearly not in Nash Equilibrium, because if they would have been, then no adversary would be able to exploit the victim. This suggests that there might be some inherent flaw in the Optimization procedure or the training procedure that causes the occurrence of such attacks.

Nevertheless, analyzing adversarial attacks encourages us to build more robust systems and be prepared not only for a good average-case but also for a good worst-case performance.