The objective of this project was to recreate the popular solved game “Connect-4”. We created both singleplayer and multiplayer modes with the single player mode being played against AI. The AI was constructed using minimax algorithm and optimized using alpha beta pruning. The graphic user interface was made using a python graphics library called Pygame.

The first stage of our project was to make a simple CLI version of 2 player connect 4.

We also define a print_board() function here to display the board to the user in the command line terminal. The function iterates through the board and prints the value in each cell.

The next task is to take input from the user and insert their piece in the game board. We do so in the following way:

Finally, we must determine when the game ends and print an appropriate message. The game ends when one of the players win, or if the board becomes full, in which case it is a draw.

To determine if a player has won the game, we define a function winning_check() to iterate through the board and check each row, column and diagonal for 4 in a row. It returns 0 if neither player has won, otherwise it returns the winning player's number.

Following is a section from the winning_check() function:

We finally get the following code: 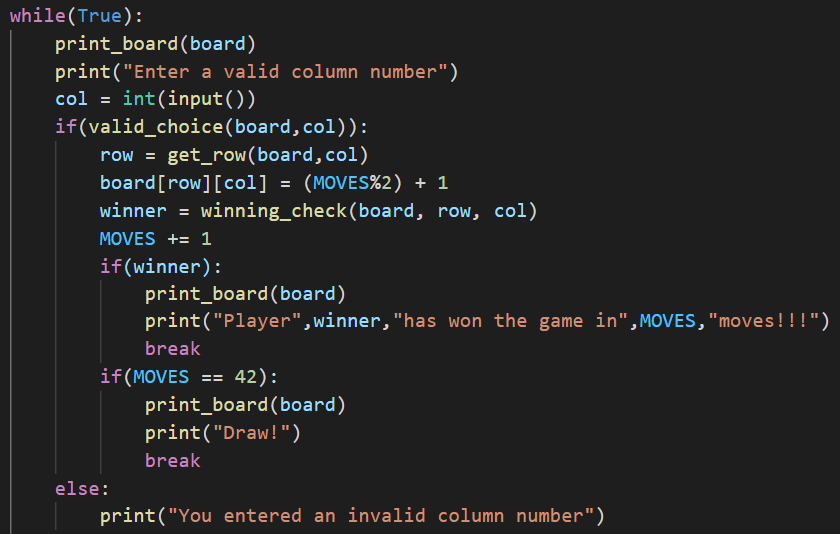 The final 2 player CLI game is shown below: 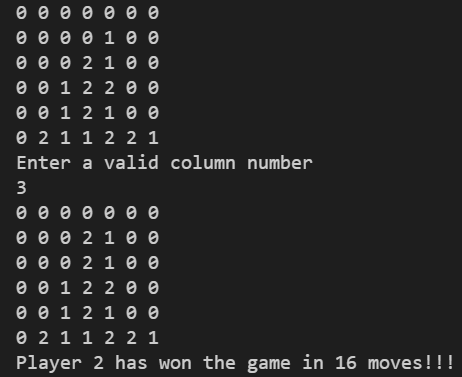 This was used to implement the single player version of the game, i.e, the user playing against the computer. The minimax algorithm explores all possible moves in a game tree upto a specific depth and returns the most favourable move to the computer.

The core concept of this algorithm can be explained using this game tree.

At each level the maximum/minimum value of the child nodes is chosen depending on whether the player is maximizing or minimizing. For example, at level 3, the first node is assigned 10 over infinity as it is the minimizing player’s move. At level 2 the first node is assigned 10 over 5 as it is the maximizing player’s move. In this fashion the algorithm assigns values to all nodes of the game tree upto a specific depth using depth first search and recursion. The value assigned to the root node represents the most favourable move the computer can make. 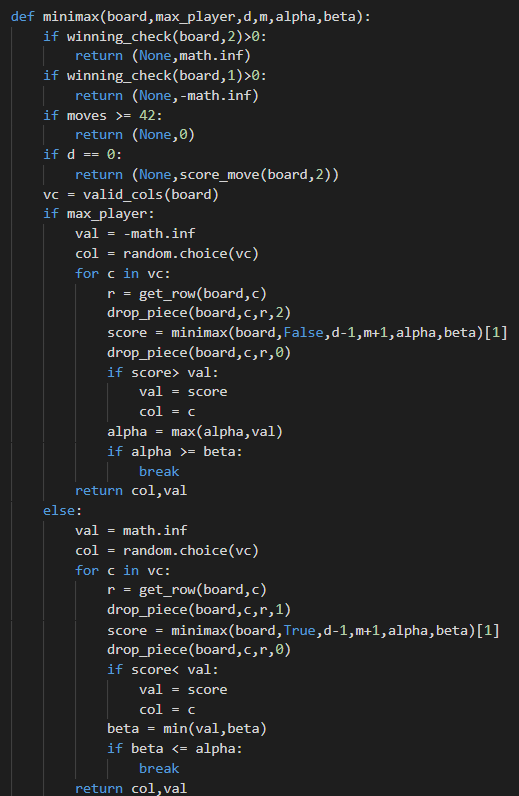 In case none of these conditions are satisfied, the function checks whether the player passed to it is the maximizing player or not and gets a list of all the valid columns where moves can be made using the valid_cols function. If the player is maximizing, the initial value is set to negative infinity. Then a loop is run considering all possible moves by dropping the token in each column one by one. The minimax function is then called on it’s child node and the score obtained is compared with the current value. The maximum of these two is set to be the value for the next iteration. The maximum value obtained after iterating through all columns, i.e, after going through all moves and the column which gave that value, i.e, the move which yielded that value is then returned. In case the player is minimizing the initial value is set to positive infinity and a similar loop is run considering all possible moves and the least value obtained after iterating through all columns and the respective column which yielded that value are returned.

The overall score is evaluated using the evaluate and score_move functions. The score_move function checks each row, column, positive and negative diagonals for the tokens present in them in windows of 4 slots each. Each window is passed to the evaluate function which returns the score of a particular window. The center column is also given priority in this function since it is easier to construct rows, columns and diagonals of four using tokens from the central column.The overall score of a particular move after considering all possible windows is then calculated and returned. 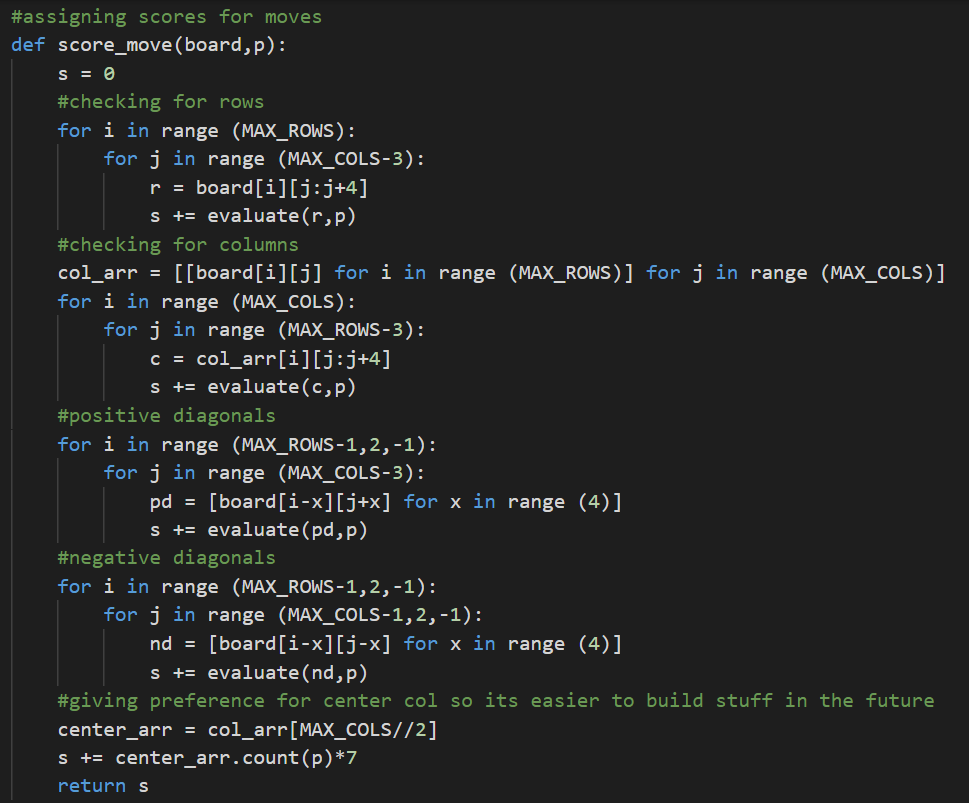 The evaluate function assigns scores for a window passed to it depending on how many maximizing and minimizing tokens along with empty slots are present in the window, i.e, how favourable it is for the given player, and returns the score of that particular window. 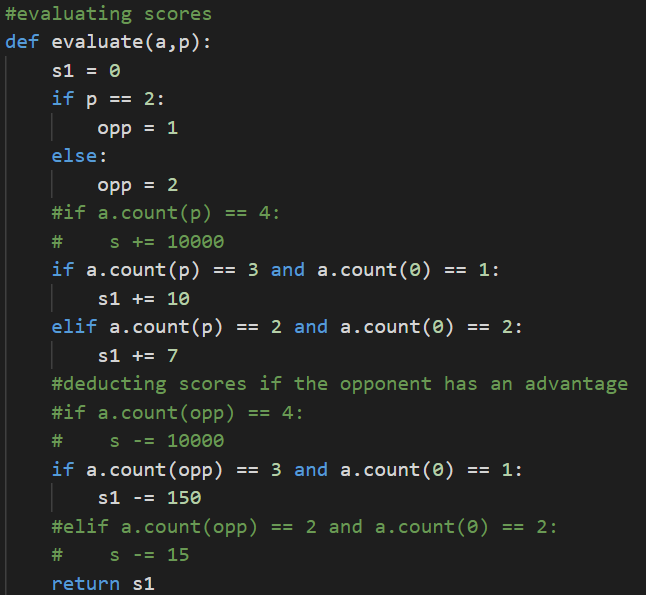 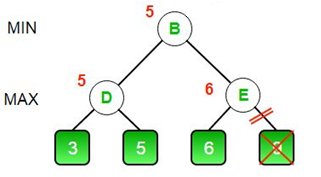 Consider the above game tree. First, node D is evaluated and it is assigned the value of max(3,5) = 5. Now the algorithm begins evaluating node E. It evaluates the left branch and gets a value of 6. Since E is a maximizing node, its value will be greater than or equal to 6. However, node B is a minimizing node and its value will be the minimum of the values of nodes D and E. Since the value of node D is known to be 5, and E is at least 6, the value of the node B will be 5. Now the algorithm can prune or ignore the right branch of E, since it cannot influence the value of the node B. This is the core idea of the alpha beta pruning strategy.

Since beta becomes less than alpha, we stop evaluating descendants of the node E.

In this manner, alpha beta pruning reduces the number of nodes evaluated, significantly improving the speed of minimax algorithm.

It has been implemented in the project in following manner: 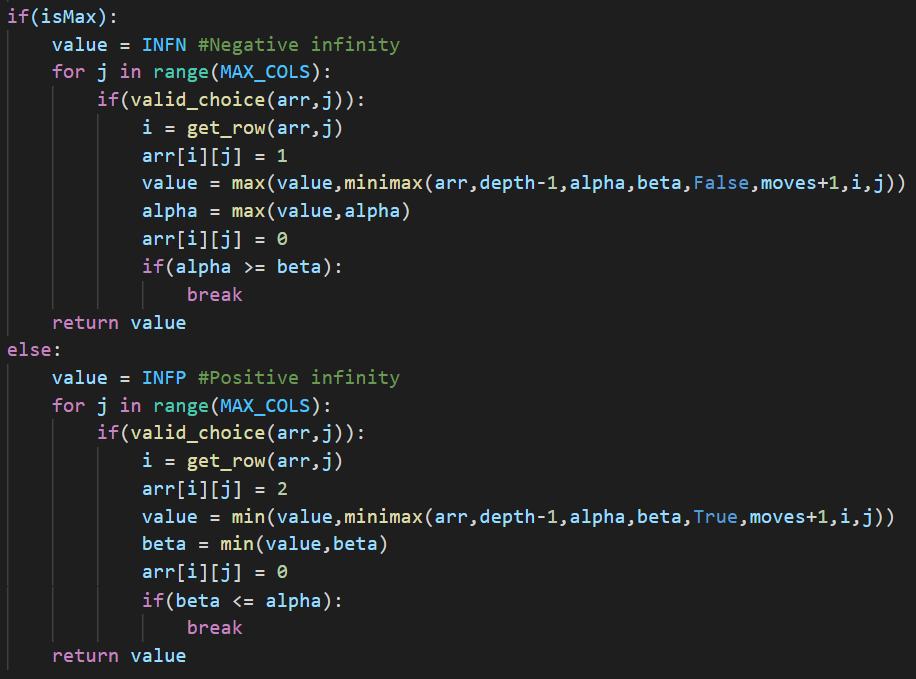 Pygame is a free and open-source python library commonly used for making games. We have used pygame in our project to make the user interface.

The pygame.event module is used in the project to handle inputs from the user. The module stores all events such as mouse motion, mouse click, etc. in a queue. When pygame.event.get() is called, a list of events is returned and the event queue is reset. This list can be iterated and each event can be individually handled.

Each event has attributes associated with it such as event.pos, event.type, etc. which are used to discern the position of event, the type of event, etc.

An example of its use in the project is as follows: 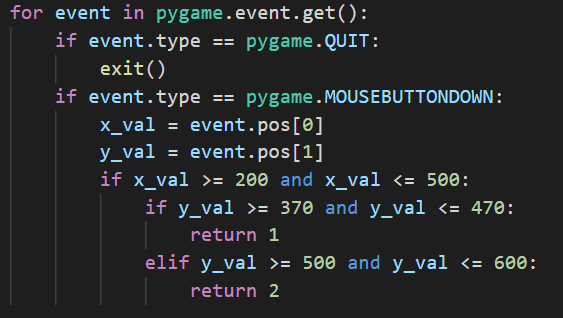 In the above code, the list of events is iterated. For each event, we check the type of the event. Pygame.QUIT represents the action of pressing the close button and pygame.MOUSEBUTTONDOWN represents the action of clicking a mouse button. If the user clicks on the close button, the game terminates. If the user clicks somewhere else, we determine the position of the mouse click. The pos attribute of an event is a tuple containing the x and y coordinates of the event. If the mouse click lies in a particular region, the function returns a value.

To draw the GUI and change it when required, we need a way to handle images. Pygame offers a way to do so in the pygame.Surface type object. Pygame.Surface contains useful attribute functions such as blit(), which is used to draw one surface over another.

We also need functions to manipulate these surfaces. For that purpose, draw and display modules in pygame are used.

The pygame.draw module contains functions to draw various shapes on a surface, and the pygame.display module lets us display a surface or multiple surfaces to the user.

Finally, we need a way to represent text in the game. The pygame.font module is used for rendering text on the screen. It uses pygame.font.Font type objects to store information about the style of text. This object also contains the render() attribute function to create a new surface with text written on it.

Let us take a look at an example where these are used in the project: 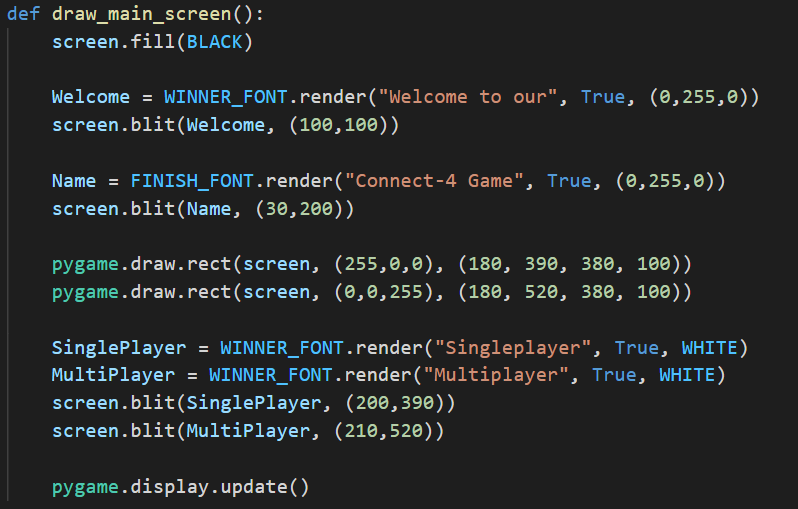 Here, screen is the surface that is displayed to the user. WINNER_FONT and FINISH_FONT are font type objects defined as follows:

Pygame.font.SysFont() is used to create a font type object. The two arguments represent the font style and size respectively.

First, screen.fill(BLACK) is called. This fills the display surface with the black colour.

The above line creates a surface that says “Welcome to our” in the text style represented by WINNER_FONT object. The colour of this text is (0,255,0) in RGB, i.e., green. The second argument is antialiasing, which is set to True to make the text appear smooth.

All the changes made so far to the screen surface only affect the object, and are not displayed to the user. To update the screen seen by the user, we have to call the pygame.display.update() function.

The code given above finally generates the following screen: 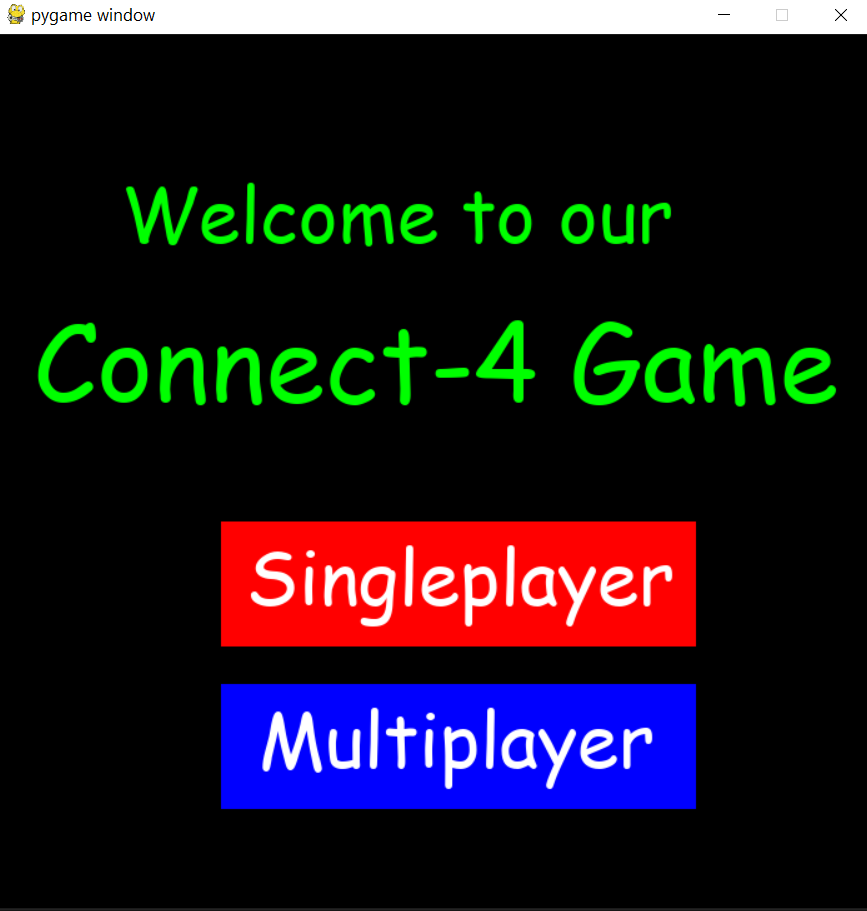 All the other screens of the game have been similarly created. Some of them are shown below: 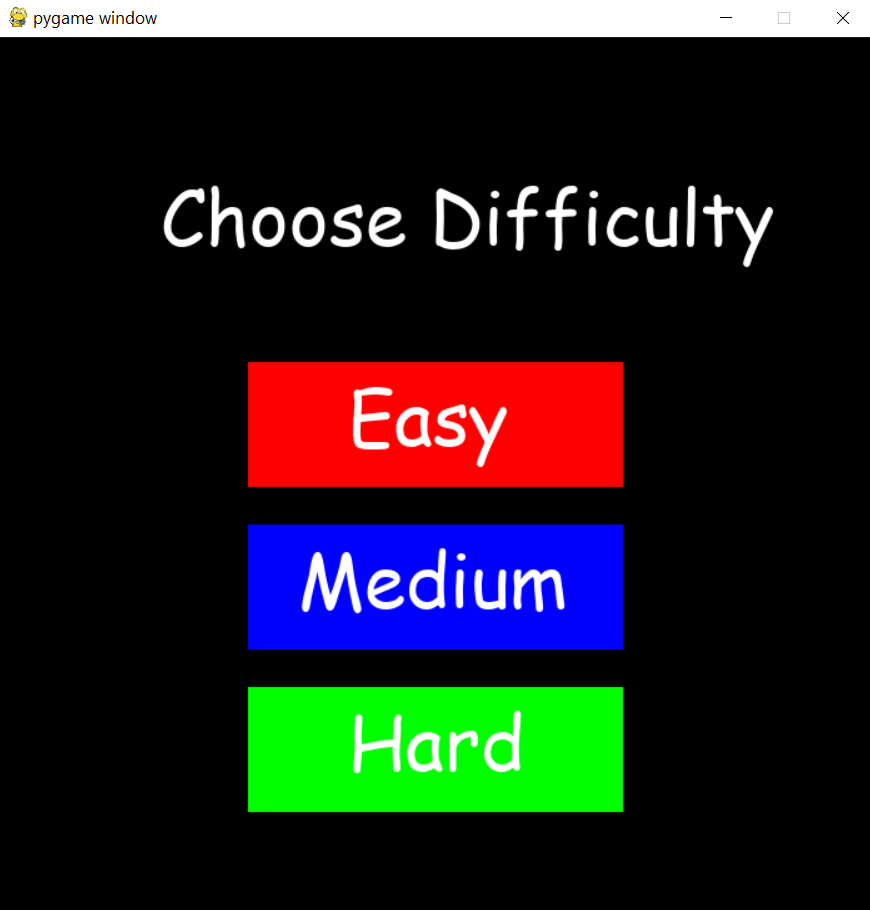 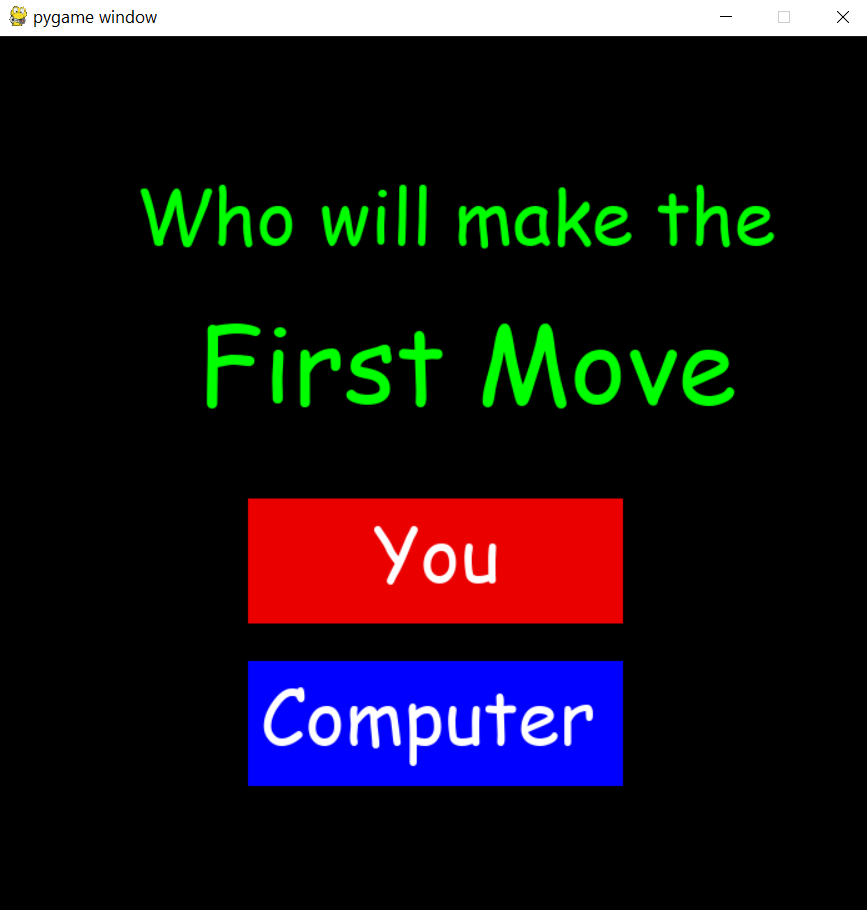 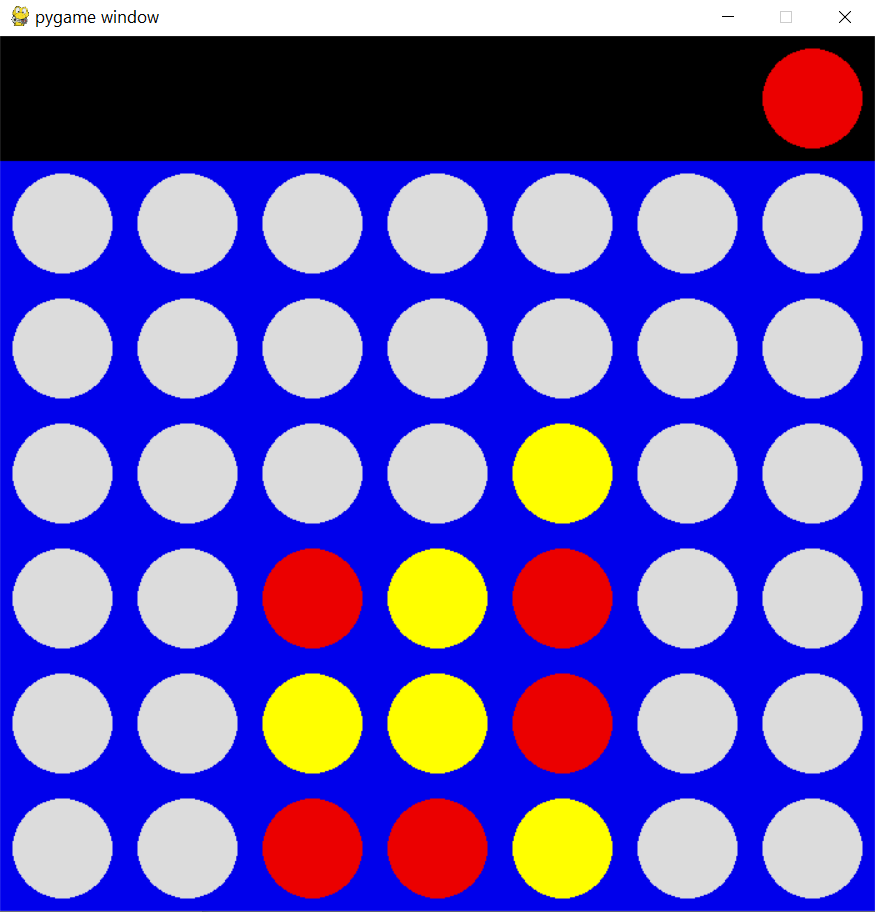 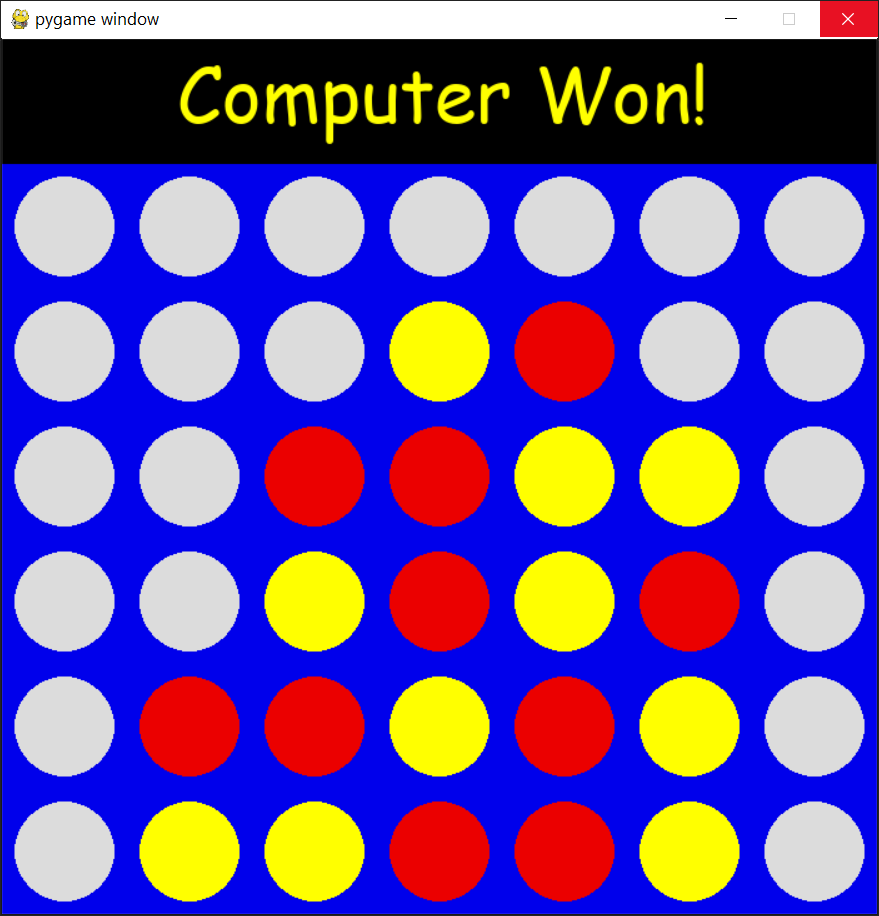 The end product is a fully functioning AI that can play a fairly decent game against any average human. However, there are some notable improvements that we can make in some of the functionality. Since a particular state of the board can be reached through more than one sequence of moves, it is evaluated multiple times as the algorithm does not store previous values. Another improvement that can be done is making the GUI more customizable and user friendly. Finally, additional features such as game review and game statistics can also be implemented in future iterations.