Aerofoil is the cross-sectional shape of an object that creates an aerodynamic force when moved through a fluid. Aerofoils are used in aircrafts either as wings to produce or as propeller blades to produce thrust. Drag Reduction System (DRS) is an innovative system introduced by FIA (Fédération Internationale de l’Automobile) in 2011 to enable overtaking of a car closely behind another. This system lets drivers to open a flap in the rear wing at certain parts of the race track. This flap opening removes much of the drag produced by the rear wing, adding around 15 kmph more to the car’s top speed, thus enabling easy overtaking along straights. DRS is activated by the driver, and can be deactivated either manually or automatically when the brakes are applied.

Analysis was done on multiple aerofoils mentioned above for the optimum lift to drag ratio and Selig 1223 and GOE 448 were chosen for the DRS.

The CFD analysis of DRS was conducted using Ansys Fluent. The analysis can be split into four parts : Geometry, Meshing, Setup & Solution, and Results.

The aerofoils were created by importing the coordinates from a txt file in Design Modeller. A bullet shaped fluid domain region was constructed. The aerofoil surface was subtracted from this region using the Boolean operation. 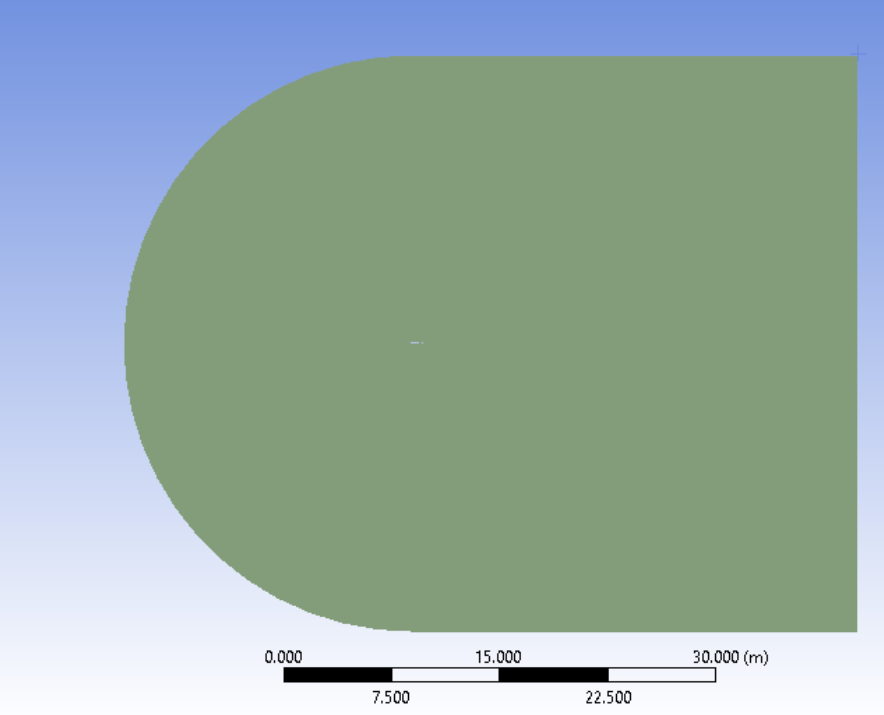 Constraint: The aerofoils must be within a 350mm by 220mm box according to FIA standards

The aerofoils were created by importing the coordinates from a .txt file in Design Modeller and manipulated to get the correct shape (scaled, rotated, and then translated). A large rectangular fluid domain region was constructed around the aerofoil. The aerofoil surfaces were subtracted from this region using the Boolean operation. 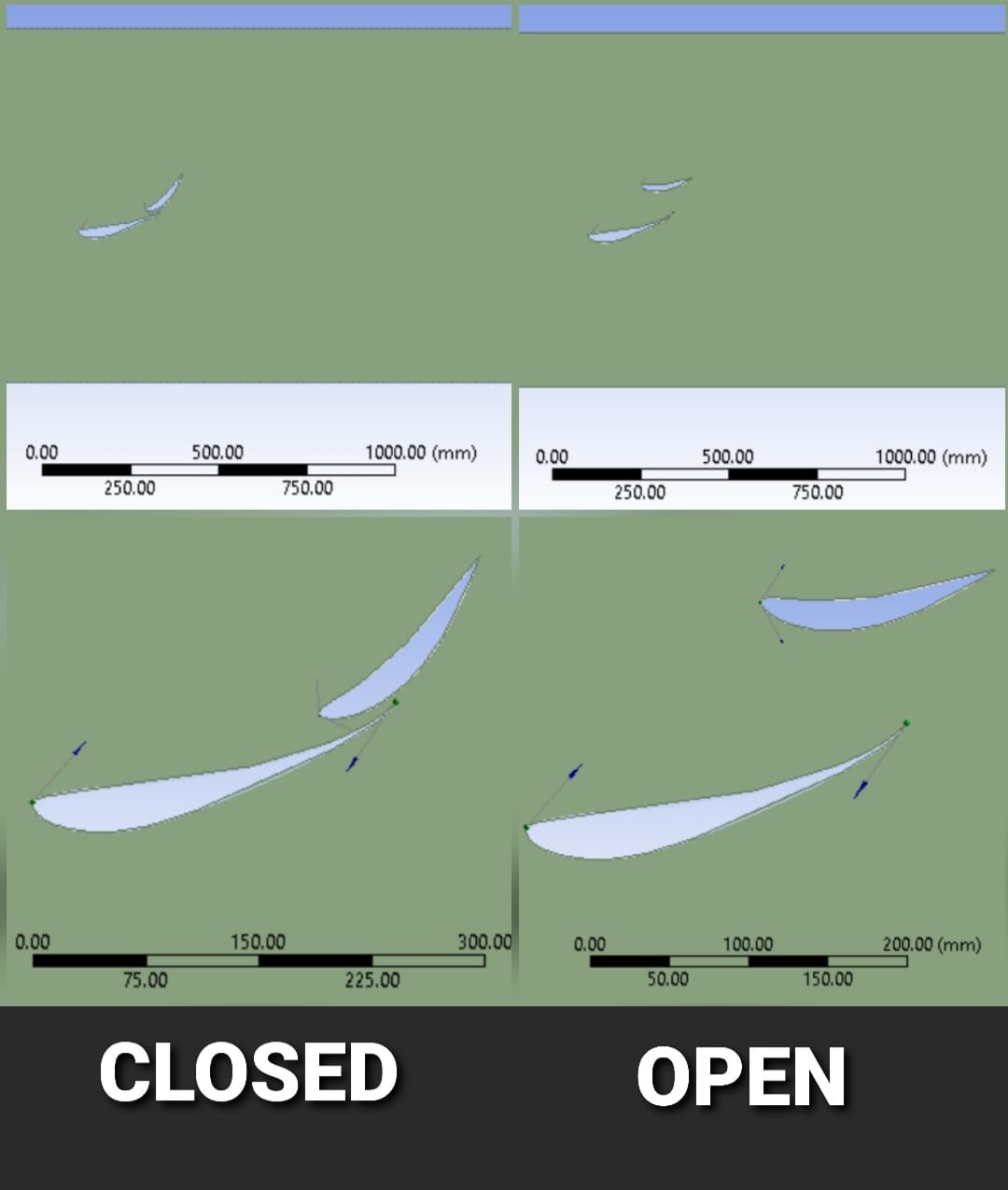 The mesh used is inflation-type mesh with a body sizing around the aerofoil and edge sizing to get finer elements. Finally, a grid independent study was conducted with a tolerance limit of 1%. 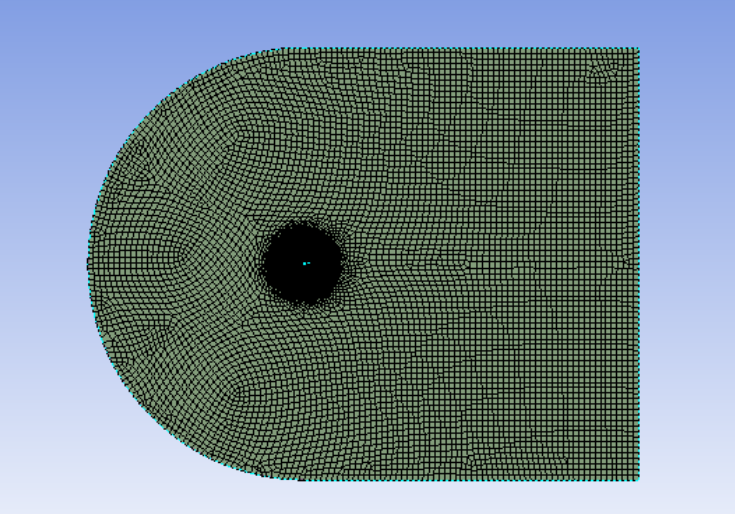 The mesh used is of refinement type. Every edge of the aerofoil has edge sizing and a grid independent study was conducted with a tolerance limit of 1%. 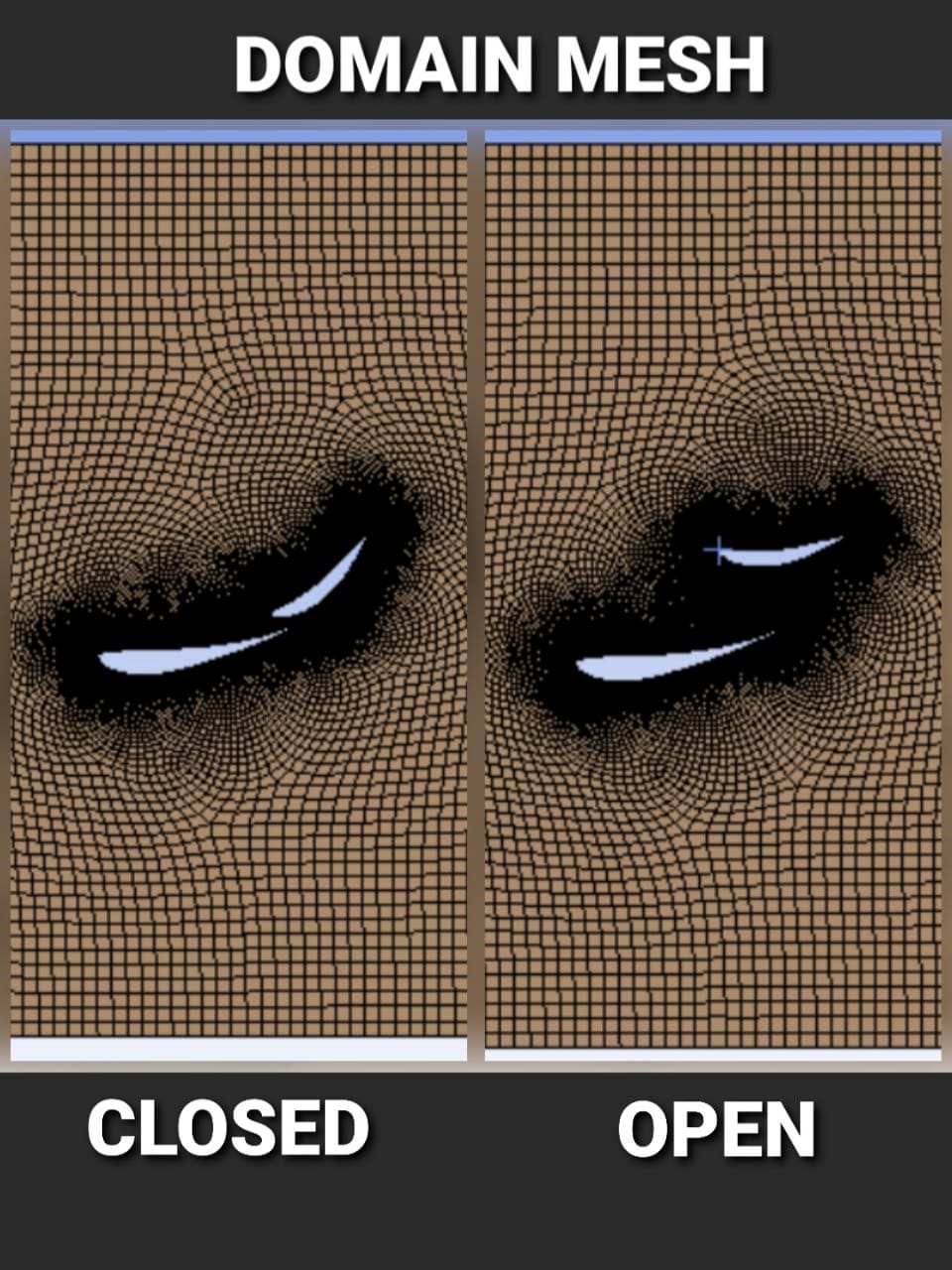 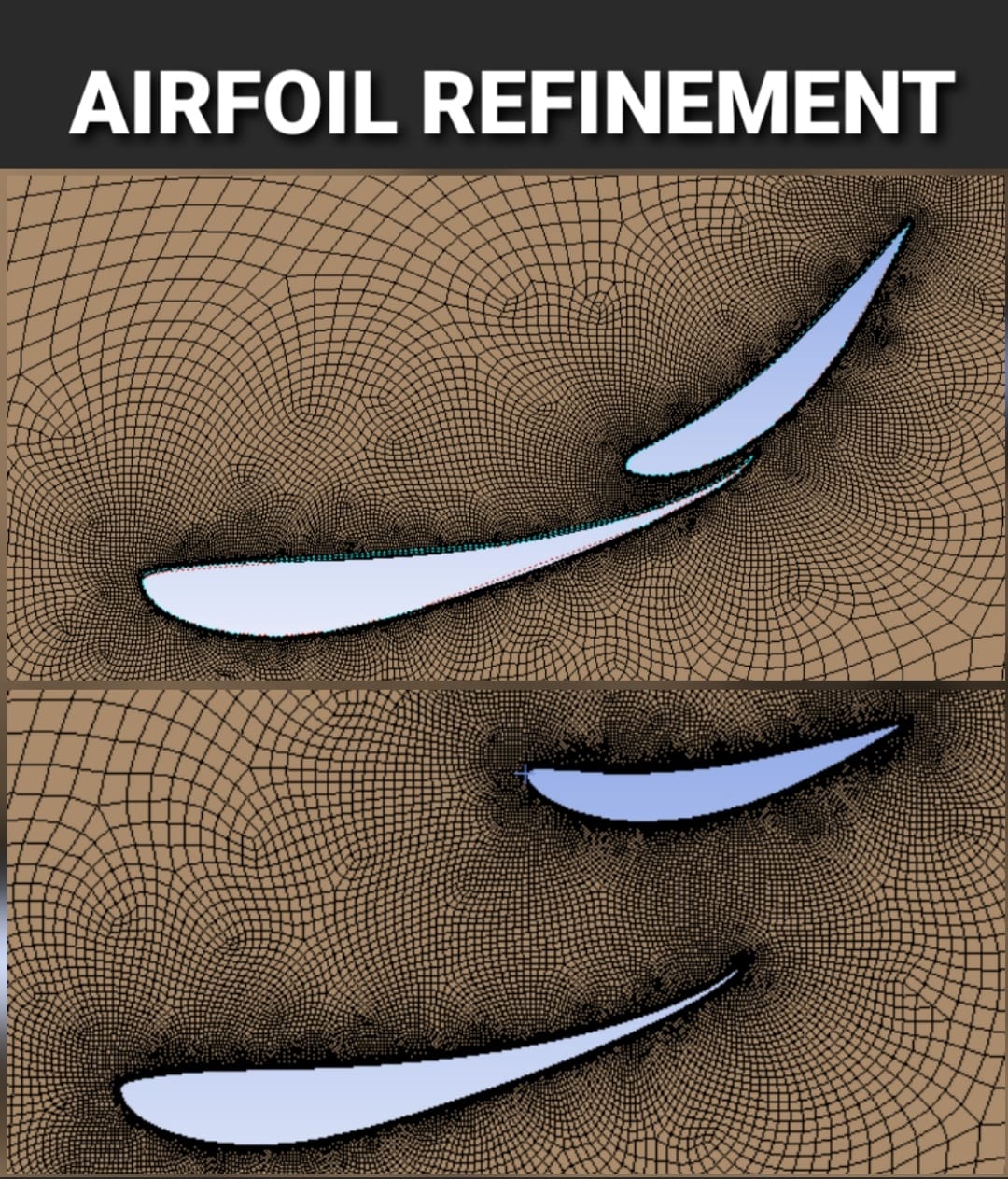 Velocity Inlet : 3 values of inlet velocity were chosen (30 m/s, 43.33 m/s and 50 m/s) and analysis of all three was conducted with the selected angles of attack 12 degrees and 8 degrees on the main wing.

The Angles of Attack were chosen based on the literature survey conducted. The selected Angles of Attack produce the best results (minimum drag and maximum downforce) on Selig 1223 individually.

The angle of attack on the open system was 8 degrees in both the analyses, chosen based on the literature survey.

The results obtained from the analysis are as follows:

From the above tables, it can be concluded that the optimum angle of attack is 12 degrees on the main wing for maximum reduction in drag and minimum loss of downforce.

The 3D model was constructed on Fusion and can be used to conduct further analysis on the rear wing so as to optimize it along with the end plates. 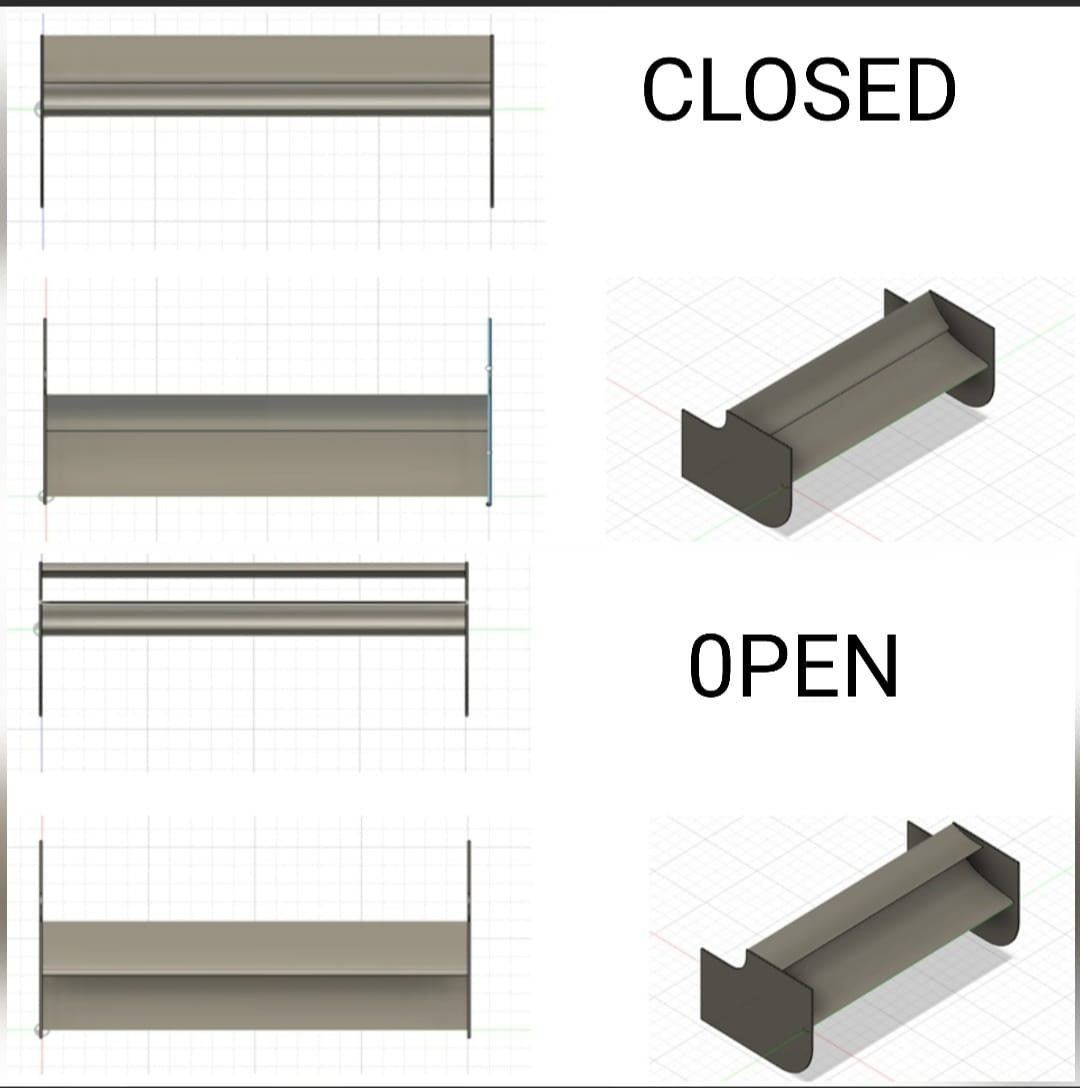 From the tables and graphs, it can be observed that a Drag Reduction System can be successfully implemented on the rear wing of an F1 car to increase speed and enable overtaking, since it would result in a substantial decrease in the drag force on the rear wing, although the downforce on wing would be decreased as well.

It can also be seen from the literature survey and the analysis conducted that :