The second-order semidiscrete central-upwind scheme is used to model compressible flow systems. The equations governing the flow are the equation of mass conservation, energy conservation and the compressible Euler Equations. An OpenMP parallelized numerical framework written in C++, controlled through simple Python scripts by the use of pybind11, is in use to implement the semidiscrete central-upwind scheme. The implementation is tested through a number of classic examples with known solutions. The current form of the code is only featured for uniform, quadrilateral cells, with zero gradient boundary conditions.

The main goal of the project was to develop an understanding and simulate shock- interactions. This is to be done by implementing the second-order semidiscrete central-upwind scheme introduced by Kurganov et al.

One should note that this calculation must be done for each time step.

The reason for the preceding discussion is to highlight the importance of being able to calculate a cheap intercell numerical flux.

The semidiscrete central-upwind scheme, bypasses the need for a reimann solver, providing in itself a means of calculating the intercell numerical flux. This method has been described in the papers by Kurganov et al.

Due to the lower computational cost and sufficient accuracy of the scheme, this scheme has been chosen to implement to serve the goal of developing a code for shock-wave interaction.

A prototype of the scheme was first implemented using Python and tested using the numerical experiments that were present in the paper on meshes of very low refinements.

Highly refined meshes could not be used due to how long it took to run. The results matched, bearing in mind the poor refinement of the mesh and are depicted below. 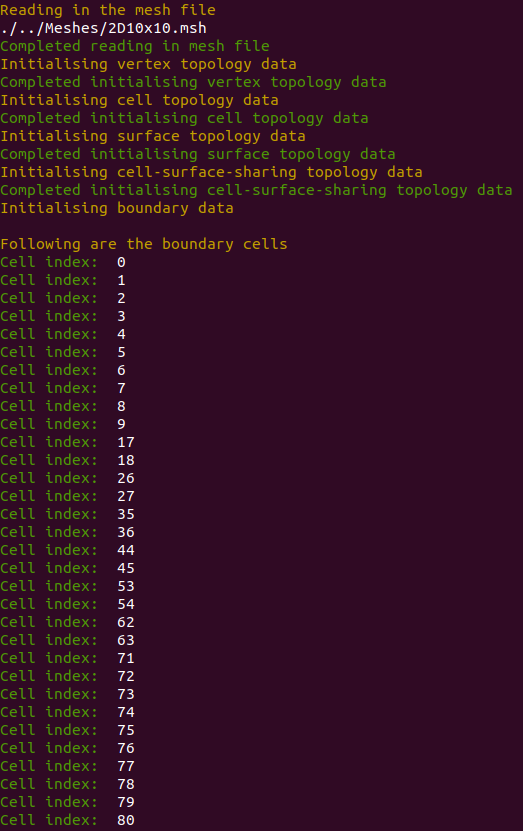 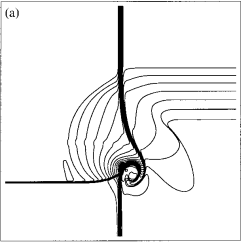 Python scripts were developed, as well as, all the numerical experiments present in the paper were attempted [5].

Once the code was sufficiently validated, the scheme was re-written in C++ to be able to run faster. The main aim was to allow us to the code on more refined meshes.

Although the code ran faster, we wanted to see if we could take it to another step.

OpenMP uses a portable, scalable model that gives programmers a simple and flexible interface for developing parallel applications for platforms ranging from the standard desktop computer to the supercomputer.

OpenMP was then studied to parallelise code so that appropriate use of multi-core processors could be fully utilised [3]. The version of the code without the OpenMP primitives, ran serially on a single processor of the system’s Intel i7 processor, instead of making full use of all the 12 threads on which execution of the code could be conducted.

The code was then modified to the present form — an OpenMP parallelized numerical framework written in C++, controlled through simple Python scripts by the use of pybind11, is in use to implement the semidiscrete central-upwind scheme [6].

Now we detail some of the features of the code

An OpenMP parallelized numerical framework written in C++, controlled through simple Python scripts by the use of pybind11, is in use to implement the semidiscrete central-upwind scheme for second-order spatial accuracy and first- order temporal accuracy.

The current form of the code is only featured for uniform, quadrilateral cells, with zero gradient boundary conditions. The following results has been obtained using the 6th configuration [1]. 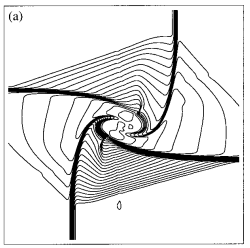 The above simulation took 5 whole days to run. Due to the lack of proper computational resources to continue testing the code, the fact that my latop could not fully function when utilizing all the processors for the simulation and the matching results in the paper, it has been concluded that the code is valid and the semidiscrete central-upwind scheme has been implmented.

The code can be further improved by refactoring into a highly parallelised form to be run on a GPU. This GPU accelerated form, written in CUDA, tailor-made for a Turing micro-architecture NVIDIA GPU is currently underway.

The accuracy of the code as a solver can be further improved increasing the order of spatial and temporal accuracy.

Furthermore, the code can also be modified to solve for additional fields, like the eletric field, magnetic field to incorporate EM effects. More modifications can be made on this code-base to develop it for more ambitious applications.

[5] Python version of the code